Zeus is not only the current ruler of the multiverse, but also the most-powerful of all Olympians. He is a mighty-looking man with a lordly appearance. Brownhaired and bearded, he is commonly dressed in a fine royal toga, or less-often in armor.

Zeus is the last son of Cronus and Rhea. His father, the previous ruler of the multiverse, was maddened with paranoia over a prophecy that one of his children would overthrow him. As a result, he devoured each of Rhea’s children after birth. In desperation, Rhea turned to her mother Gaea for help. She replaced Zeus with a stone wrapped in swaddling clothes, which Cronus devoured. Gaea then hid Zeus in a desolate corner of Classical Earth, where he was raised by Nymphs and protected from view by Hecate’s magic. Zeus was raised there to become a warrior capable of overthrowing his father. Once Zeus was old enough, he ambushed Cronus and cut open his stomach after a desperate battle. Zeus’ five siblings (Hestia, Demeter, Hera, Poseidon, and Hades) spilled from Cronus’ open stomach. Zeus fled with Rhea and the infant Olympians, hiding them away from the vengeful Titans. Following Gaea’s instructions, Zeus travelled to Tartarus, where he fought and slew the terrible dragon that guarded the entrance to the divine prison. He liberated Gaea’s monstrous children, the Hecatoncheires and Cyclopes, who swore to serve Zeus. Out of gratitude, Cyclopes forged Zeus’ Thunderbolt. When his siblings had grown, the Olympians, Cyclopes, Hecatoncheires, and several allied Titans went to war against Cronus’ kingdom. The war was terrible and lasted for seven years, as the Titans had a great force of arms at their disposal. While Cronus had great power as ruler of the multiverse, the Olympians had great skills and a growing number of allies. Treachery was an important advantage for the Olympians, particularly when Prometheus turned to their side. Olympian Magic and the aid of Gaea also proved to be of great benefit while fighting the Titans. In the end, the Olympians were triumphant and Zeus became the new King of the Gods. He restructured the multiverse in his image, the form it now holds. Zeus and his brothers then drew lots to determine who was destined to rule the various areas of creation. Zeus oversaw the sky and dry surface, Poseidon became ruler of the sea and underwater realms, and Hades was given the Underworld. Zeus married Hera, the most impressive of his sisters. Together, they had several children: Ares, Eileithyia, and Hebe. Zeus soon demonstrated a nearly insatiable lust, however. He claimed many of the attractive female Titans who were defeated as spoils of war. He fathered Apollo and Artemis by Leto; the Fates by Themis; Athena by Metis; Dionysius, Hermes, and the Graces from different Nymphs; and various other children from mortal women, including the mighty Heracles. Zeus has chased goddesses, Nymphs, mortal queens, and peasant girls alike. His lusts are not always limited to the female gender. While mostly a lover of women, he has been known to fall in lust with fair and feminine boys. Zeus has also engaged in embarrassing behavior that he would likely condemn as undignified had others been involved. His wife Hera is exceedingly jealous, always despising Zeus’ many lovers and bastards, even trying to make their lives miserable or destroy them. After the war, Zeus imprisoned several of the Titans in Tartarus, earning the wrath of his grandmother Gaea. She sent terrible monsters, Typhon and Echidna, to attack Olympus. They nearly laid Olympus to waste before Zeus defeated them. Later, she created the Gigantes to wage war with the Olympians, but were ultimately defeated thanks to the crucial help of Heracles, who was made a god for his great heroism. On the whole, Zeus has ruled more justly than Uranus and Cronus, though he is still an authoritarian god with some tyrannical tendencies. He has been a little more democratic than his forefathers, creating a council of gods that act as his advisors. Zeus has generally brought more civilization and stability to the multiverse than previous gods, but this was not his initial intention. At first, Zeus felt that mortal men should be kept low and subservient to the gods, but he was tricked by Prometheus into granting them certain rights. His position softened as he matured, seeing the benefit of a multiverse in which mortals could flourish. Thus, Zeus has shown a capacity for growth, something both his father and grandfather lacked. 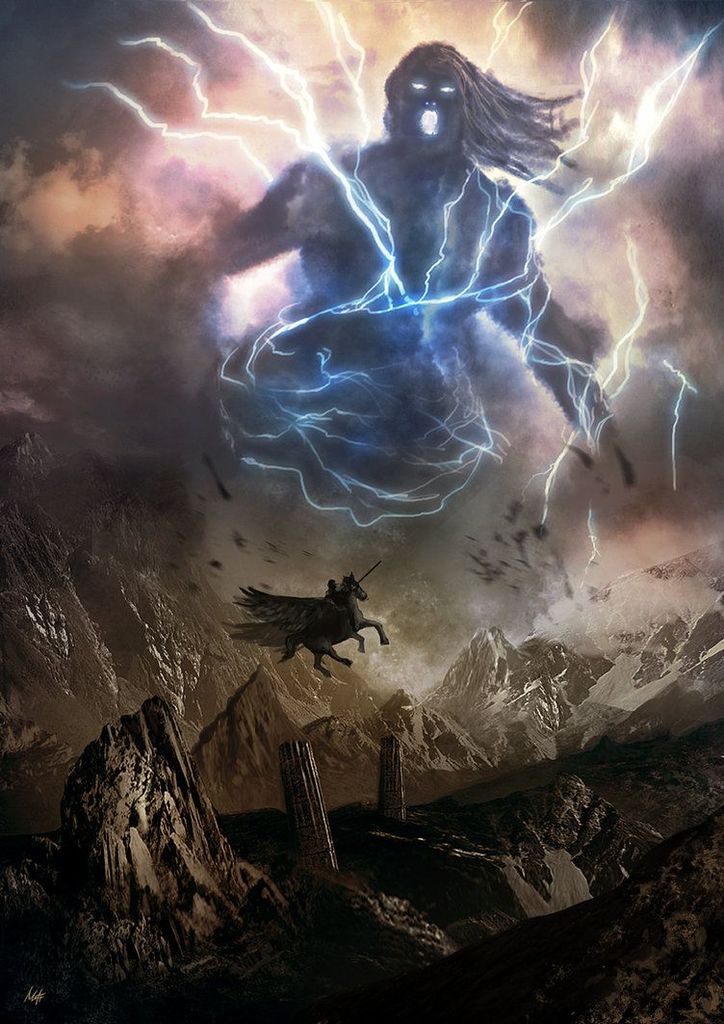