Hephaestus appears as a bearded, adult man with leathered skin from the heat of his forge. His arms are muscled and hands rough from working his craft, but one leg is deformed and shrunken. Hephaestus’ features are generally ugly, but he has kind eyes. He often wears a smith’s apron and wields his hammer or tongs, the tools of his craft.

Hephaestus is the son of Hera, but has no father. Hera created him spontaneously using a measure of her own power, motivated by spite over Zeus’ many infidelities. She wanted to create a son independent of Zeus without violating her marriage vows. Her secret hope was for a son powerful enough to one day supplant Zeus as King of the Gods. Something went wrong—even a being of Hera’s power did not have sufficient creative energy to make a perfect child by herself. Hephaestus survived his birth, but was born with a deformed leg and ugliness. Hera was disgusted and rejected the child, abandoning him to the elements. Hephaestus did not die, however, as he was rescued by the kind Nymph Eurynome. She took in the child and raised him as her own. Zeus was so touched by her kindness that he later took Eurynome as a lover and fathered the Graces by her. Hephaestus was raised and encouraged by his fostermother. While he was physically-handicapped by his deformity and socially spurned by his appearance, he quickly proved to be a child of great intelligence, mostly directed toward invention and craftsmanship. He apprenticed on Classical Earth as a smith and produced works of exceeding beauty and quality. He discovered how to channel magic into the creation of powerful artefacts without resorting to Primordial favor or the binding of Daemons. Zeus was sufficiently impressed with the young man. While Hephaestus was not his son, Zeus took Hephaestus back to Olympus and set him among the gods. Hephaestus studied and further perfected his craft with the wise Cyclopes. He went from apprentice to master at the divine forge quickly. On Olympus, Hephaestus oversaw the construction of most of the palaces and great buildings, and personally built the various thrones for each of the Olympian Gods who sit at Zeus’ council. Hephaestus also constructed many of the gods’ marvelous artefacts—Hermes’ winged helmet and sandals, Apollo’s and Artemis’ bows, Aphrodite’s Girdle of Enchantment, various chariots, and even the box given to Pandora. He similarly constructed a small chariot for himself that moves under its own power, granting improved mobility. Hephaestus has recently constructed a number of automatons, artificial men made of metal and bronze that assist him and the Cyclopes in their workshop. Hephaestus has always been deeply self-conscious—he is awkward in speech, stutters frequently, and is uncomfortable with social situations. This did not stop him from having mortal and Nymph lovers before ascending to Olympus, however. These women were enchanted by his genius and gentle nature rather than disgusted by his appearance and lack of charisma. Unfortunately, Hephaestus has always tended to fall in love with women who would not have him—he was spurned by Athena and deeply attracted to Artemis. When Zeus decided the fate of Aphrodite, he declared that she must marry Hephaestus in order to remain on Olympus. He fell madly in love with the most-beautiful of all the goddesses, but Aphrodite finds him ugly and disgusting. She is not swayed by his kindness or craft, and hates him. She has ignored Hephaestus for most of their marriage, and took his own brother Ares as her lover. Hephaestus was enraged more by Ares than Aphrodite, accusing his brother of having seduced or tricked his wife. Hephaestus caught them in a clever trap while they were making love and dragged them naked before the other Olympian gods. They laughed at the situation, but showed no sympathy—Zeus made Ares pay a fine to Hephaestus for his adultery, but no further action was taken apart from the craftsman’s humiliation. Aphrodite has publically disavowed her marriage to Hephaestus and refuses to comply with even the most basic of wifely duties. The rejection renewed Hephaestus’ resentment towards his mother. He crafted a new, golden throne for Hera as a trap—once seated she could not stand up from it. Hera struggled on the throne for some time, while Hephaestus intentionally kept her servants away. Dionysius got Hera drunk and seduced her. Hephaestus came to feel guilty over Hera’s humiliation—he hated his mother for how she always treated him, but her public humiliation made him see how vulnerable she really was. Since then, he has sought to make amends, but Hera’s dislike for him has only grown. Aglaea, one of the Graces, has taken Hephaestus as a lover. She has assumed the role of substitute wife, treating him with great obedience and kindness, while her sisters look upon Hephaestus as a beloved, older brother. Hephaestus cares deeply for Aglaea and her sisters. He is very grateful for their kindness, but still longs for Aphrodite—he would do almost anything to win her heart, despite it never being possible. 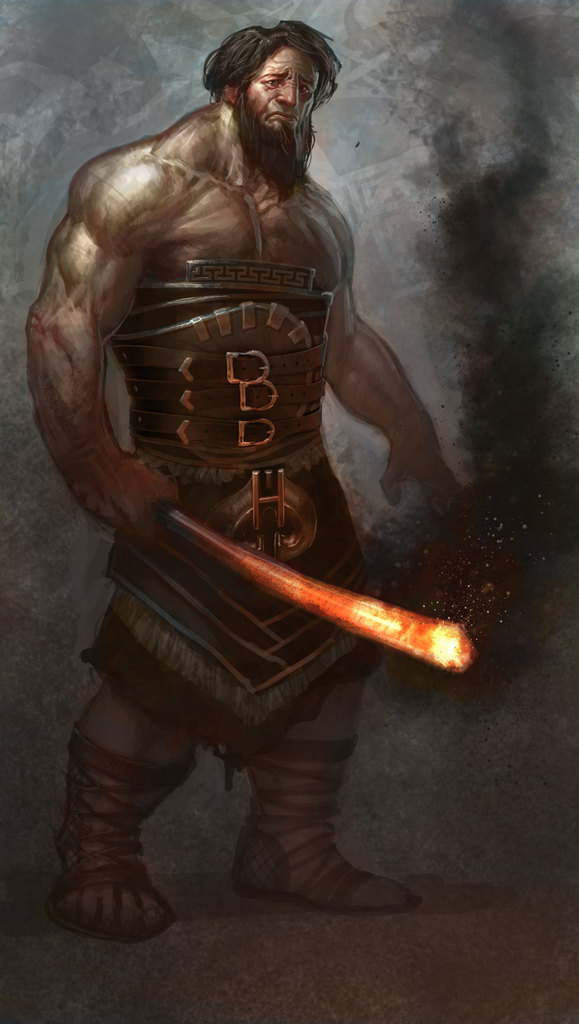